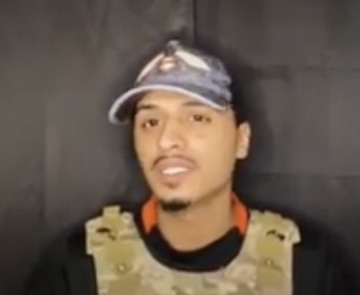 Providence resident Rey Alberto Herrera has announced he is running for Governor in Rhode Island.

He is a stark contrast to the politicians like Dan McKee, Seth Magaziner, Nellie Gorbea, and Matt Brown who have spent much of their careers in government.

And Herrera is the polar opposite of corporate executive Helena Foulkes who has an estimated net worth of $100 million — he is homeless.

But don’t discount him, he has big ideas.

While he may not have an Ivy League pedigree, his platform may be attractive to some Rhode Islanders.

What he wants? To improve the state’s public education system — and a Rhode Island-focused cannabis economy.

“My main focuses will be the educational system which is ranked dead last in New England and in the lower bracket of the United States.  Can you imagine your child doing his chemical experiments with Albert Einstein or Shakespeare, teaching them to write so elegantly? Virtual reality has the capabilities to do this and it’s time our educational system catches up to technology because the seeds we plant today will be the trees tomorrow,” said Herrera.

He describes his background in Rhode Island.

“If I had to define what I do for a living, I would say I’m a ‘wage slave.’ You name it, I’ve done it. Mostly ten dollar minimum wage, in the land of opportunities,” said Herrera who said he willl be running as an independent.

Rhode Island currently does not have legalized recreational marijuana.

“I was, like so many in my situation, treading water, keeping a roof over my head, providing for my son, and then the pandemic hit,” he said.

“Like so many, I lost my job, my home, and my dignity. I’m running so that we can all take back what was taken from us,” he added.

Ways to Consume Cannabis Even in Quarantine

Many American individuals or households consider dogs, cats or other domesticated animals as part of the family. According to data published by the American Pet Products Association, 60.2 million US households own at least one […]

SMITHS FALLS, ON, CANADA — November 23, 2020 — Canopy Growth Corporation (“Canopy Growth” or the “company”) (TSX:WEED NASDAQ:CGC) and its medical division, Spectrum Therapeutics, have completed and published a new study on the long-term […]

The Hemp Industry Responds to the DEA Rule With a Lawsuit

How Far Away Is Adult Use Cannabis Reform On The Global Calendar?