A loss for the cannabis community; The Cannabist, Denver Post’s cannabis vertical, fired the entirety of their staff and may swap team of journalists for content aggregation bots.

The cuts aren’t due to a shortage. The demand for cannabis news is still knocking, newsworthy cannabis stories are plenty, and the cultural revolution of the cannabis community hasn’t taken a break. In terms of funds, the Denver Post drove a 19% profit margin for the publication’s parent company, Digital First Media, which is owned by Alden Global Capital, a hedge fund group.

Alden Global Capital may profit by swapping out journalists for bots, thus lowering their budget. It’s another instance in which the cannabis community suffers at the hands of wealthy outsiders looking to capitalize off of the boom. For a publication built on journalistic integrity to be sold out for bots aggregating “marijuana” content, the switch is a letdown.

While Ainslinger propaganda is still pervasive, the importance of cannabis journalism continues. Without cannabis-focused publications under the direction of invested community members, the movement of normalization will suffer.

Jake Browne, a former Cannabist employee, tweeted a thread about the dismaying changes that DFM has implemented.

“All I care is that The Cannabist doesn’t die,” Ricardo Baca told Leafly. “I can’t handle a world that doesn’t have a Cannabist.”

Ricardo Baca, the founder of The Cannabist, is now looking to purchase the publication. Baca has worked as a reporter and editor for 15 years, and started Grasslands: A Journalism- Minded Agency last year after leaving Denver Post. Baca has gained the interest of investors for acquiring The Cannabist, and has likewise spoken with other traditional outlets that may be interested in taking on a cannabis channel.

Baca tweeted today that he sent a letter of intent to the Denver Post. The proposed buying cost of The Cannabist has not been revealed. 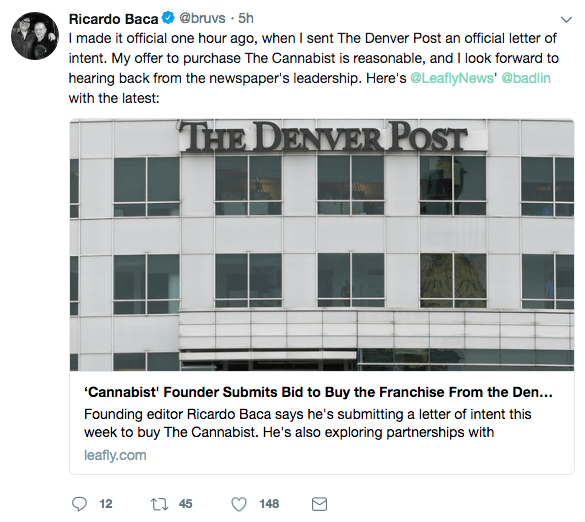 With the state budget hurting amid COVID-19 and a past commitment from Gov. Laura Kelly to sign a medical marijuana bill, this session may present the most realistic shot yet at passing meaningful cannabis policies. […]

New bill not all that dope, say activists

By Chelsea Geach 13h ago Share this article: ShareTweetShareShareShareEmailShare CANNABIS could be the cash crop South Africa needs to lift us out of the lockdown economic crisis – but the new bill before Parliament blocks […]