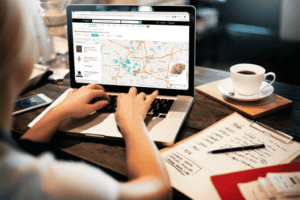 In an investor presentation filed this week with U.S. securities regulators, the parent company of Weedmaps disclosed that a federal investigation into the marijuana industry that involves the cannabis advertising giant remains “unresolved.”

The disclosure raises questions about both the probe’s status and whether it could affect California-based Weedmaps’ plans to go public on the Nasdaq through a deal that values the new company created through the transaction at $1.5 billion.

The investor presentation from WM Holding filed with the U.S. Securities and Exchange Commission on Dec. 10 includes the following “supplemental investor disclosure” about a U.S. Department of Justice investigation, specifically a subpoena regarding records for the company’s business dealings:

“As of Nov. 10, 2020, the DOJ investigation has not been resolved. In our dialogue with the DOJ, we have had productive discussions about a potential resolution, but no agreement has been reached,” the presentation notes on the last page of the document.

“Following an initial production of documents in November 2019, further productions responsive to the subpoena have been postponed pending discussions about resolving the matter.”

The U.S. attorney’s office for the Eastern District of California, which issued the subpoena to Weedmaps’ then-parent company in September 2019 – Ghost Management Group – declined to comment on the disclosure.

The subpoena identified nearly 100 companies and individuals in the cannabis industry and requested a huge swath of records from Weedmaps related to its entire company history, dating to 2008.

To date, the DOJ has not filed any charges in connection with the investigation.

When asked about the federal probe on Thursday by Cheddar TV, Weedmaps CEO Chris Beals replied, “We don’t comment on specific legal matters.”

In its disclosure, WM Holding’s stated that it’s the company’s belief the investigation is focused on unlicensed cannabis retailers:

“Based on our discussions with the DOJ since we received the subpoena, we believe the primary focus of their investigation is on our relationships in 2019 with cannabis retailers in California who may not have been properly licensed under state law at the time they were advertising on the WM platform,” the document states.

“In August 2019, prior to receiving the subpoena, and following discussions with the California Bureau of Cannabis Control, we announced that we would remove from the platform any remaining California retailers who failed to provide us with information demonstrating a valid cannabis license.”

The disclosure goes on to note: “That was accomplished by the end of 2019. We currently require that all retailers on the platform provide license information.”

Cannabis industry attorneys and analysts said it was in Weedmaps’ interest to disclose the information to investors. Otherwise, the company risked a backlash.

Nevertheless, attorneys and analysts agreed the disclosure was likely to trigger additional questions from investors.

“They would have severe exposure if this was going on, and they didn’t disclose it to investors,” said Henry Wykowski, a former prosecutor who is now a private lawyer and serves as general counsel for the California Cannabis Industry Association.

“The question is, if I were an investor … I would want more detail about this. A lot more detail.”

Regan said the probe could turn out to be nothing or could result in a fine or a more serious action. But investors want to know so they can “put the past in the past and focus their assessment on the company’s future.”

Weedmaps could be in hot legal water, she said, or the company could wind up completely in the clear.

Either way, the U.S. attorney’s office isn’t likely to make an announcement about it, so it’s up to Weedmaps to reassure investors, McElfresh said.

“I don’t know we can draw a lot from it, either way, except that (Weedmaps) must feel confident that this is not going to blow up in their faces,” McElfresh said. “I would also say, the longer (the investigation) goes, the lower the odds are you’re going to wind up with (charges being filed).

“But it doesn’t completely eliminate it.”

New York-based consultant Matt Karnes, principal at New York-based GreenWave Advisors, said he believes the disclosure will “raise a lot of questions from the shareholder base.”

Karnes pointed out that the special purpose acquisition company (SPAC) through which Weedmaps plans to go public – Silver Spike Acquisition Corp. – can still unravel if the investors aren’t satisfied with the amount of detail disclosed by Weedmaps.

“There’s uncertainty. This transaction, we don’t know what the DOJ is going to conclude, or what other issues are out there,” Karnes said. “If I was a shareholder in Silver Spike, I’d think really hard about approving this transaction.”

John Schroyer can be reached at [email protected]

Jeff Smith can be reached at [email protected]

VISTA — The city is tackling medicinal marijuana fees again as it ramps up its processes to both regulate and foster growth within the industry. During its Nov. 10 meeting, the Vista City Council approved […]

Does the Fair Labor Standards Act Apply to Cannabis Businesses? The U.S. Supreme Court May Decide

Cannabis isn’t federally legal. Companies who operate in the cannabis space really only have the protection of the state’s laws in which they operate. Even full compliance with state laws is no shield to federal […]

Cannabis Impact on Pain and Opiate Use – A Clinician's Perspective

Have You Ever Experienced The CBD Entourage Effect?