What’s behind all the protests in Thailand right now? What are the protesters demanding? Who are they?

Since August, an organic – mostly young Thais – political movement has been building. It’s different from every other protest movement in the past. The people attending the rallies don’t really align themselves, or identify with, the past political factions. They’re not red shirts or yellow shirts. They are new and claim they’re seeking key changes to Thailand’s political system and the role and powers of the Head of State.

Generally, the current protest movement has distinguished itself with self-restraint, calls for peaceful assembly and its ability to organise large, creative protests. There has been a few scuffles with police, and 5 people with minor injuries. But, compared to past Thai protests, the restraint on both sides has been welcomed.

What are their demands?

The Thai PM never ran for parliament, was not voted for by the Thai electorate and was appointed as PM by a joint sitting of parliament. The entire upper house of the parliament is made up from hand-picked senators by the last military Junta which ran Thailand from 2014 – 2019.

Are their demands realistic?

It is unlikely that the current government would entertain any of the demands as it would result in their loss of “power”. Particularly the Senators who, if the constitution was changed, would have to run for their positions and be voted for by Thai voters.

But the current government are making small concessions and trying to push through 7 amendments to the current Thai Charter (a 2017 constitution) which would go part of the way to indicate to the protesters that they are listening. But the concessions are small indeed and many commentators believe the 7 amendments are merely stalling tactics to push any real change down the road.

Who are the protesters?

They are mostly students with an average age well under 25 years old. The two largest groups call themselves the Free Youth Movement and the United Front of Thammasat and Demonstration. There is also a sub section of groups – one called “Bad Students” who have been campaigning for meaningful changes in Thai education, as well as LGBT and labour groups. But they are all united in the main thrust of central demands.

The Bad Student movement has witnessed the defiant raising of the 3 finger salute by previously compliant Thai school students during the morning assembly, flag raising and singing of the national anthem. They are demanding changes to the ‘rote’ education system, a relaxation of the strict haircut and dress codes, and less harassment from teachers and education officials.

As a new generation of Thais, they also have little fear in raising “uncomfortable” issues that limited the previous generations of Thais. They’re the first protest movement to publicly utter the “unutterable” and openly criticise the role of the Thai monarch. This particular aspect of their campaign is highly divisive in Thailand and has generated a number of counter ‘Royalist’ protest groups as well, usually clad in yellow, the colour representing the Thai monarchy.

What are their tactics?

So far the protesters have remained peaceful during the rallies, except for a few minor scuffles with police. On 2 occasions resistance from officials has involved the use of high-power water cannons, as well as tear gas in at least one case. The main advantage to the latest protest movement is their youth, their weaponising of social media, their consistent, and relentless, demands, and their resolve to stage large and persistent protests around the city, and other Thai provinces.

In the latest round of cat-and-mouse protest games with police, the protesters have shown that are able to keep one step ahead of officials and can switch their tactics and locations in moments, through the use of encrypted messaging systems.

There’s also lots of them and have no problems in attracting rally crowds of 20,000+

How has the Prayut government responded?

The Thai PM had made it clear that he wanted to avoid violence at all costs in the past few months of student protests. But when a royal motorcade headed into a throng of protesters on October 14, the situation changed quickly and a State of Emergency was enacted for the next 7 days.

How, or why, the motorcade was allowed to take a route straight into the path of an announced protest is up for debate, but the royalist prime minister saw the “interaction” between the protesters and the royal motorcade as a bridge too far.

The government imposed a State of Emergency that banned gatherings of more than 5 people anywhere in Bangkok. It also restricted publication of posts, news or online information “that could harm national security”. It allowed police to arrest anyone linked to the protests and secure “any area” it deems necessary.

But the protesters largely ignored the State of Emergency, indeed they increased the frequency of their protests.

Does it have anything to do with the Covid-19 pandemic?

No. The changes demanded by the protesters have been welling up for many years, long before the Covid-19 pandemic happened.

What reforms to the Thai monarchy are the protesters seeking?

Protesters are demanding a reverse in the monarch’s revised constitutional powers, which were put in place in 2017 after the coronation of King Maha Vachiralongkorn.

The activists say that the newly acquired powers were a wind back of the changes from Siam to Thailand in 1932 when the absolute powers of the monarch were removed by a new constitutional monarchy, enshrining representative democracy (the country was formerly renamed ‘Thailand’ on June 23, 1939). The protesters claim the monarchy is now “too close” to the Thai army and government and argue that this relationship is undermining Thailand’s democracy.

The protesters want HM the King to relinquish the additional controls he reclaimed over the palace fortune estimated to be in the vicinity of 30 billion dollars. His Majesty also took direct control over 3 battalions of the Thai army.

Finally, protesters say that the Thai King spends most of the year in Bavaria in Germany, and point to his alleged extravagant lifestyle and alleged interference in Thai affairs from afar.

The lèse majesté laws are a draconian set of laws that prevent criticisism or insults directed at the Thai monarch or royal family. Infringing the laws can result in a 15 year prison sentence. The monarchy is protected by Section 112 of the Thai Penal Code.

Has the palace or monarch made any comment about the current situation?

In a rare moment, and certainly the first time commenting about the current political unrest, His Majesty King Vajiralongkorn described Thailand as “the land of compromise”.

The comment came in response from a question by Jonathan Miller, a correspondent of British broadcaster Channel 4, who was part of an audience of international media invited to sit among a crowd of royalist supporters in front of the Grand Palace on November 1,2020. Asked what he would say to the anti-government protesters, His Majesty first replied… “no comment”, then added… “We love them all the same. We love them all the same”.

Otherwise the Palace has no official statements relating to the specific concerns or demands of the protest movement.

How do the lèse majesté laws work in practice?

In June, PM Prayut announced that the lèse majesté law would no longer be applied on the express wishes of His Majesty. But there has never been an official comment relating to this from the Palace.

But the police have still arrested and charged Thais for anti-monarchy or anti-King comments on social media by applying the Computer Crimes Act and laws relating to Sedition. Since October 13, 89 activists have been arrested and charged, mainly with sedition. 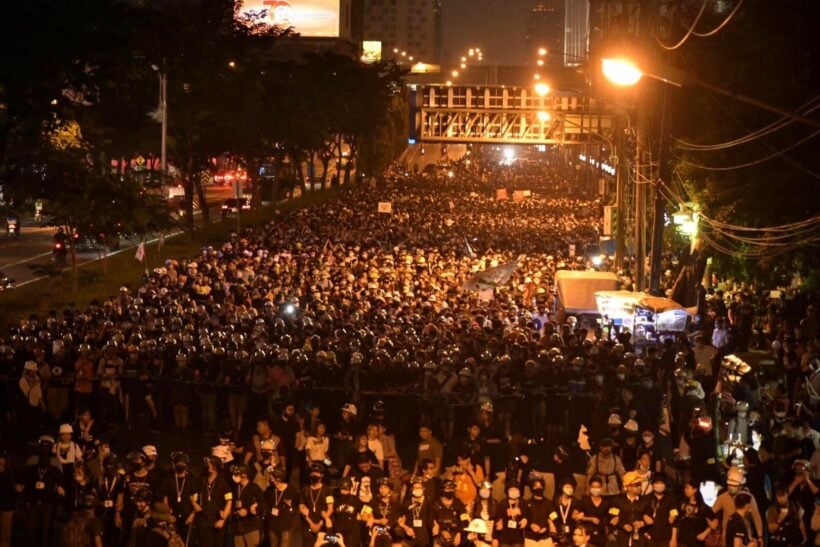 A.C.T. ‘legalised’ cannabis and the sky is yet to fall in

The A.C.T. has relaxed laws on cannabis use, possibly paving the way for other states to consider more progressive legislation, writes Chris Mordd Richards. ON 30 JANUARY 2020, the A.C.T. “legalised” cannabis, in the process […]

After a career in the military, veterans are equipped with numerous skills that make them an easy hire for thousands of civilian jobs. At first glance, the cannabis industry might not seem like the most […]

How to protect your cannabis brand from a host of issues

Advertising a Cannabis Business Through the Pandemic