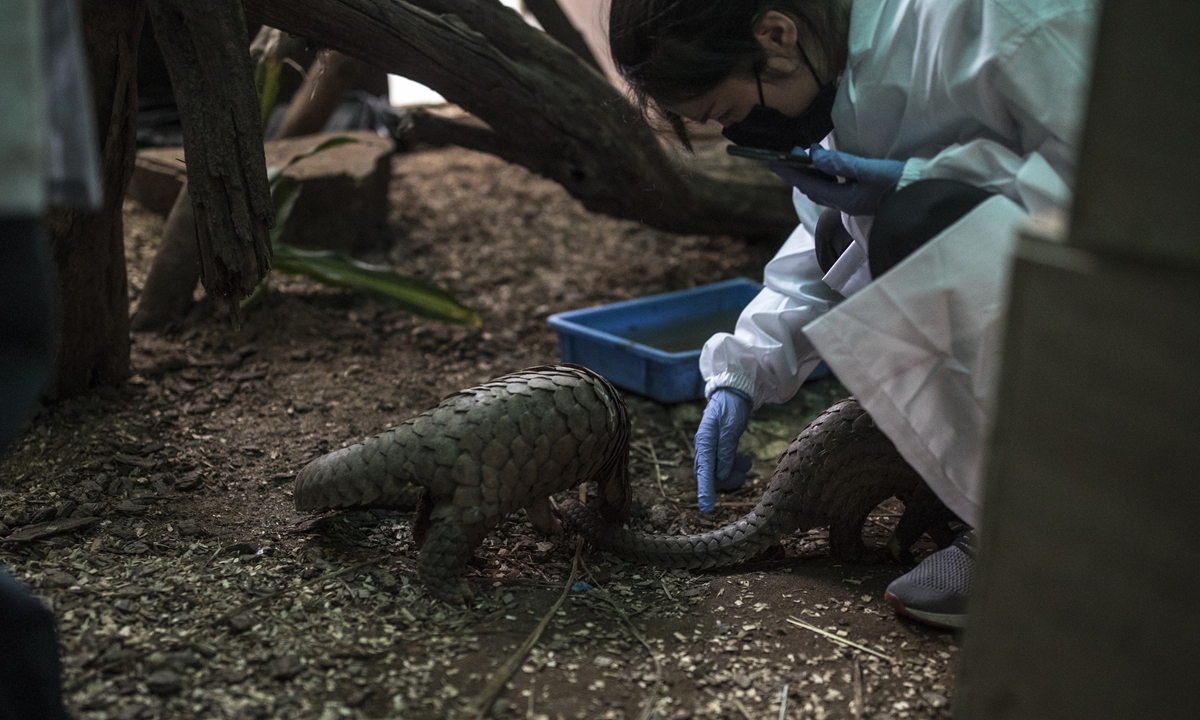 A caretaker examines a pangolin. Photos: Courtesy of the China Biodiversity Conservation and Green Development Foundation

Pangolins, the only mammal with scales, have been facing extinction for years now, but their situation has been improving as the Chinese government has increased conservation efforts such as increasing protective measures and removing the animal from the Chinese Pharmacopoeia during the 13th Five-Year Plan(2016-20).

Pangolins live in wet areas in flatland forests, hillsides or at the foot of mountains and insects are their main food. While they have this in common with many other creatures, they stand out in that, while they are mammals, they are covered with scales.

The original Chinese Pharmacopoeia said that the scales of pangolins have medicinal properties and can help promote the production of breast milk in women who have just given birth. The huge market demand for pangolin scales was one of the major reasons for the poaching of the animals.

In the late 1990s, more than 60,000 pangolins were living in 11 different provinces in China including South China’s Guangdong Province and East China’s Fujian Province, according to a report by the People’s Daily.

But there has been a sharp decline in numbers around the world, with the pangolin population in China dropping about 90 percent by 2018, partly because of the destruction of their habitats and poaching.

During the 13th Five-Year Plan period, the risk of facing pangolins was recognized and protection was increased.

The turning point was 2017, Su Fei, a member of the China Biodiversity Conservation and Green Development Foundation, told the Global Times.

Public interest in pangolins in China sharply increased in 2017. On some Chinese media platforms such as The Paper, pangolins ranked second in terms of searches in 2017, just behind giant pandas, the foundation discovered.

The eating of pangolins was strictly cracked down by the authorities. For instance, in March 2017, the head of the Chinese Forestry and Grasslands Administration investigated reports of an official who dined on pangolins at a banquet.

As all eight species of pangolins were included in the Convention on International Trade in Endangered Species of Wild Fauna and Flora in 2017, the Chinese government banned all commercial imports of pangolins and related products, and intensified crackdowns on illegal poaching of pangolins and other wildlife resources in August 2018.

Two groundbreaking conservation measures for pangolins were launched in China in 2020.

Authorities have said they will work harder to protect and rescue the species by improving their habitats, cracking down on poaching and trafficking, as well as setting up a protection research centers and a gene bank for pangolins.

The World Wide Fund for Nature applauded these moves, saying that they will help deter the poaching of pangolins.

Besides increasing the status of pangolins, the Chinese government has also cracked down on their use in traditional medicine.

China formally released a new version of the Chinese Pharmacopoeia in July that did not include pangolins, which means the animal will no longer be used in traditional Chinese medicine (TCM).

The new version was released by the National Medical Products Administration, the National Health Commission and other bureaus on Thursday, and is scheduled to take effect on December 30.

The future of pangolins

Although China has achieved much in 2020 to protect pangolins, conservation measures still need to be strengthened, Su noted.

“2020 is a significant year for the pangolins’ chances of survival,” she said.

The China Biodiversity Conservation and Green Development Foundation has urged authorities to publish an official notice on further strengthening and regulating pangolin protections as soon as possible to guide further conservation work.

The Chinese Forestry and Grasslands Administration sent an exposure draft to the foundation in April, according to Su, to collect proposals on protecting pangolins in China.

The draft includes more conservation measures such as strictly regulating the rescue of pangolins.

The draft said that if a pangolin is in good physical condition, no longer needs treatment or is able to survive in the wild after being rescued, related institutes should release it back into the wild in a suitable habitat.

For those pangolins that have been confirmed to be unable to survive in the wild, they will be cared for and bred in captivity, but their situation should be updated on the official website of the administration.

Supervision of the pangolin trade and related products will be strengthened, the draft emphasized again. The administration will carry on stricter import and export controls on such products and request all regions in China further intensify the administration of pangolin scale consumption.
Newspaper headline: Scales are not enough

WASHINGTON — The Food and Drug Administration said it cannot conclude cannabidiol (C.B.D.) is Generally Recognized As Safe (GRAS) for use in human or animal food, because of a lack of scientific information supporting its […]

Opening video statement by Shri Prakash Javadekar, CBD COP President, Minister of Environment, Forests and Climate Change, India, on the occasion of the Fifth Meeting of the Ad Hoc Open-Ended Working Group on Review of Implementation of the Convention, 16 – 20 June 2014, Montreal, Canada