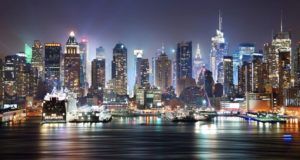 MJBizDaily takeaway: Experts believe that New York needs to expand its MMJ program in advance of potential adult use.

If not, supply and access issues could be exacerbated, making it difficult to meet demand and curb the huge illicit market, particularly in New York City.

Another issue: How to ensure an adult-use program has a strong social equity and diversity component. Nine of the state’s 10 existing medical marijuana licensees are multistate operators.

Proponents of state legalization ballot measures have significantly outraised opponents this year, about $19 million compared with roughly half a million.

MJBizDaily takeaway: The data suggests that opponents might be less willing to spend a lot of money to fight the legalization momentum in states, perhaps recognizing growing public support for marijuana legalization – especially medical cannabis.

Or, as the next item on Mississippi illustrates, opponents might be trying different tactics.

A Mississippi mayor made a last-minute legal effort to remove a business-friendly medical marijuana initiative from the state ballot.

And it looks as if the state Supreme Court won’t even rule on the issue until after the election.

MJBizDaily takeaway: While public support for MMJ is strong in politically conservative states such as Mississippi, resistance among public officials is high.

In addition to the mayor’s legal maneuver, state lawmakers moved to thwart passage of the measure by placing a competing referendum on the ballot.

An important takeaway is that local residents, even in a state that attracts huge numbers of tourists, are critical to the economic vitality of the Nevada marijuana industry.

The data and anecdotal evidence show that industry operators have done a good job adapting to the pandemic through online ordering and discounts in a bid to cater to local consumers.

Preliminary results show that a slim majority of voters in New Zealand rejected the country’s referendum on a proposed bill to legalize and regulate sales of adult-use cannabis.

However, with almost 500,000 votes yet to be counted, there remains a chance that the outcome could be altered next week – though it’s considered unlikely.

MJBizDaily takeaway: While it will probably be rejected when all the votes are counted, the referendum should be seen as symbolic progress for advocates of a regulated adult-use market.

With potential recreational legalization now in the rear-view mirror, cannabis businesses will have to refocus their efforts on New Zealand’s burgeoning medical market.

But the big question remains: Is New Zealand’s domestic market large enough to support all the businesses gearing up to take a run at the medical market?

Any business looking at potential exports to fill the gap should brace for severe competition overseas.

Jeff Smith can be reached at [email protected]

One week it’s a bad study on hydroxychloroquine, next it’s a shoddy report hyping cannabis’s antiviral potential. In fact, the only thing that seems to outpace the burgeoning list of retracted research is the onslaught […]

Cannabis supply chain agreements (e.g., manufacturing agreements, distribution agreements, license agreements, supply agreements) can be difficult enough to draft and negotiate when there are just two parties. The immense amount of over-regulation in the cannabis […]

New Zealand’s cannabis referendum explained in 90 seconds | On the Rag: Weed | The Spinoff