Detroit — Proposed rules for the operation of recreational marijuana shops in the city are expected to be introduced Monday, with a focus on giving priority to Detroiters.

City Councilman James Tate is set to join Detroit Mayor Mike Duggan and members of the community for a news conference at City Hall to detail the long-awaited ordinance for recreational marijuana licensingthat guarantees no less than half of all licenses awarded in the city will go to legacy residents.

The program is crafted to ensure residents disproportionately affected by the nation’s failed “War on Drugs” will have an equitable opportunity to participate in the industry that’s estimated to yield $3 billion in annual sales, the city said in a news release. “We have taken the necessary time to craft legislation that is not aimed at excluding anyone from their goals to succeed in this market but to ensure that we legally provide a pathway towards inclusion and opportunity for residents of our city, which has been disproportionately impacted by marijuana convictions,” Tate said in a statement.

“Many are now profiting from the same plant that has led to countless criminal convictions which devastated countless families within our city. The time has come for equity currently not present within Detroit’s cannabis industry.”

The proposal follows an initial draft last fall that Tate argued didn’t go far enough to ensure opportunities and assistance programs to get residents into the business.

Tate’s office convened workgroups with industry professionals and grassroots advocates to develop the social equity program component of the law and identify challenges faced by Black entrepreneurs. City officials declined to release a copy of the ordinance proposal ahead of Monday’s news conference. 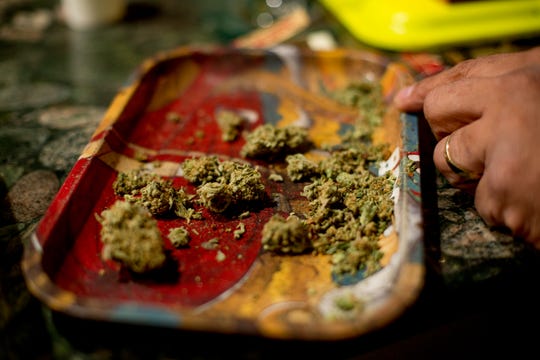 Cannabis is spread out on a rolling tray. (Photo: Anthony Lanzilote, Special to The Detroit News)

The social equity program, officials said, calls for “significant reductions in application fees” for Detroiters who have lived in the city for an extended period of time, including low-income residents or those who have been convicted of past marijuana-related offenses.

The proposal also would provide discounts on certain city-owned properties that will be available for residents certified as “Legacy Detroiters,” under the ordinance criteria, the release said.

“In the past, when licenses for marijuana businesses become available, they tend to go to nonresidents rather than those who live in this community,” Duggan said. “What Councilman Tate has crafted here in partnership with our Law Department ensures that longtime Detroit residents will have the opportunity to build real wealth as part of this lucrative new industry.”

Duggan in February stressed ahead of his annual State of the City Speech that Detroit would only approve recreational marijuana ordinances under a plan “where half of the businesses are owned by Detroiters.”

Voters in Detroit and across the state approved a ballot proposal in November 2018 to legalize adult-use of recreational marijuana. There are 1,410 municipalities with bans to block recreational marijuana businesses from opening in their communities, according to state figures provided Thursday.

The City Council first agreed to temporarily prohibit adult-use marijuana establishments through January. Later, the council postponed the opt-out period as work on the ordinance continued. It now runs through Oct. 31.

In July 2018, the council approved a law that capped allowance to 75 sites for medical marijuana sales and laid out where they could locate. Earlier this year, Duggan said that there were about 40, and only four were owned and operated by Detroit residents.

If approved, the recreational marijuana ordinance would not affect the medical marijuana businesses operating in Detroit.

Some marijuana advocates, residents and prospective shop owners have applauded the city’s efforts to set a standard for inclusion. But others have been frustrated with the delays that they argue have caused hardships.

Currently, 424 recreational licenses have been issued in the state, said David Harns, a spokesman for the state’s Department of Licensing and Regulatory Affairs.

State officials have said residency requirements for licensing are decided and enforced at the local level.

A Joint Problem: How Cannabis Testing Policies Affect Applicants’ Attraction Toward an Organization

Employees with substance abuse issues could cause problems for their employers. Recent legalization of cannabis has prompted organization to re-evaluate their drug testing policies in anticipation of increased usage among employees and potential hires (Rotermann, […]

Cresco Labs CEO talks legal marijuana industry challenges | Business | valdostadailytimes.com We recognize you are attempting to access this website from a country belonging to the European Economic Area (EEA) including the EU which […]

What Does Legalized Marijuana in NJ Mean for Westfield?