Communicating with consumers through the telephone—either by text messages or by calls—is a great way to engage with them. Indeed, a recent analysis of text messaging trends reveals that most consumers check their cell phones more than 20 times a day, with almost 20% saying they check it more than 50 times.1 Text messages have a nearly five-times higher open rate than email, and the average consumer has 96 unread emails in his inbox compared to about one unread text message at any given time.2 In short, used properly, text messaging is an effective medium to reach consumers. And cannabis companies have embraced texting with open arms, especially given that other forms of advertising currently are off limits to the industry.

But with the utility of text messaging consumers comes substantial risk. Cannabis companies are frequent targets of private litigation arising out of their texting practices. Over the past two years, dozens of class action lawsuits alleging unlawful text messages have been filed against cannabis companies, including well-known multistate operators and less recognizable ones. Most of these cases are ongoing and may rightfully be considered “bet the company” litigations. For example, a pending case against cannabis delivery company Eaze Solutions, Inc. alleges that unsolicited text messages were sent to 52,104 individuals.3 Assuming each putative class member received just one text from Eaze, the statutory damages exposure ranges between $26 million and $78 million. The court twice has rejected proposed class settlements of $1.75 million and, later, $3.5 million as being too low. Given the potential exposure, before cannabis companies click the send button on a text message, they need to ensure that they’re abiding by the law.

At the federal level, the Telephone Consumer Protection Act (TCPA) regulates all types of text messages, telemarketing and transactional/informational alike. Generally speaking, the TCPA governs how text messages are sent (i.e., manually versus automatically dialed), and how calls are conducted and voicemail messages delivered (live representative versus “artificial or prerecorded voice”).4 The TCPA also contains do not call rules applicable to marketing messages. The TCPA is enforced by the Federal Communications Commission (FCC) and, notably, through private lawsuits, including class actions. Under the TCPA, a private plaintiff can seek statutory damages of $500 for each unsolicited autodialed text message (or unsolicited call that utilizes an artificial or prerecorded voice or delivers a prerecorded message). If a solicitation text is sent to a telephone number registered on the National Do Not Call Registry or the cannabis seller’s own internal do not call list, the statutory damages are “up to” $500 per call or text. In all cases, statutory damages may be trebled to $1,500 if the TCPA violation was committed either knowingly or willfully.

These rules fit atop myriad state telemarketing and do-not-call laws, which may be more restrictive than the TCPA.

While I could fill up this entire website with the various calling and texting issues with which sellers generally struggle under the TCPA—such as the use of artificial or prerecorded voices and prerecorded messages, how to handle reassigned numbers, revocation of consent issues, etc.—this article focuses on the basic rules governing how cannabis companies can text consumers, and what types of consent they need to do so under the Act.

Under the TCPA, a seller is required to have a consumer’s “prior express consent” in order to send an autodialed non-marketing text message to a cell phone; The consent rule for autodialed marketing text messages to cell phones are different in that they require “prior express written consent” (EWC). No consent is needed in order to manually send a text message (and note that “manually” does not necessarily mean that an individual must dial all ten digits and click send from a standard smartphone).

“Prior express consent” is a lower level form of consent and generally exists where a consumer voluntarily has provided her telephone number to the seller.

“Prior express written consent,” on the other hand, is a heightened consent standard requiring a written agreement bearing (1) the signature of the person called (either traditional “wet” signature or an electronic/digital one) that clearly authorizes the seller to deliver or cause to be delivered to the consumer telemarketing messages; and (2) the telephone number to which the signatory authorizes such telemarketing messages to be delivered. If the seller utilizes an autodialer to send a marketing text message to a cell phone, then the written agreement with the consumer must also clearly and conspicuously disclose both that (a) the text may be sent using an autodialer, and (b) the consumer is not required to provide his consent as a condition of purchasing any goods or services. This EWC to be contacted must have been provided by the consumer before the text is sent. Unlike the lower standard for prior express consent, the mere provision of a cell phone number to the seller does not constitute the required EWC to be contacted at that number via an autodialer marketing purposes. 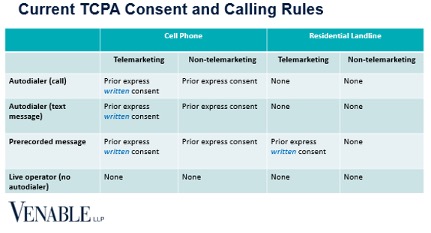 What Type of Text Are You Sending?

Generally, the type of consumer consent that is needed to send a text message is a function of the type of text and how it is being sent. “Telephone solicitations” are subject to more restrictions than purely informational or transactional text messages. The TCPA defines “telephone solicitation” to be “the initiation of a [text] message for the purpose of encouraging the purchase or rental of, or investment in, property, goods, or services.”

Finally, the TCPA also covers a third category of text messages—“dual purpose” texts. These are texts with either a customer service or informational component as well as a marketing one. Because courts and the FCC take an expansive view of what constitutes telemarketing, dual purpose texts are treated as pure marketing messages and subject to the more rigorous standards to obtain the requisite level of consumer consent.

Common examples of texts that cannabis companies send and the corresponding level of consent needed are as follows:

As noted above, for autodialed non-marketing text messages to cell phones, the lower level of simple “prior express consent” is required. Prior express consent is deemed to exist by virtue of a consumer having provided his telephone number to a cannabis company, either orally or in writing.

EWC for autodialed solicitation text messages, however, requires more. First, specific disclosures must be made “clearly and conspicuously” to the consumer. Specifically, a consumer should be advised and agree that, by providing his telephone number to the cannabis company, he is agreeing (1) to receive potentially autodialed (2) marketing text messages, and (3) that he is not required to provide his consent as a condition of making a purchase. This disclosure should not be placed beneath a submission button on a lead form or checkout page (unless an unchecked check box is utilized to demonstrate that the consumer has reviewed and accepted the disclosure); it needs to be unavoidable. The disclosure should be presented in readable, crisp font, both in size and in color, that contrasts against its background. For example, the following disclosures likely would pass muster to demonstrate EWC: 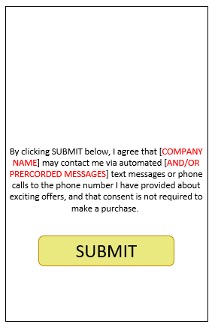 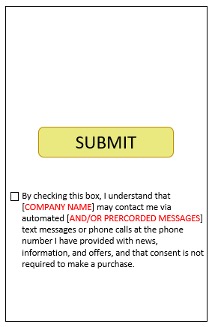 As you may now appreciate, the TCPA is a minefield (and this article just scratches the surface). However, with planning and a good compliance program, the law can be navigated to minimize risk while, at the same time, allowing for communications with cannabis consumers. Remember, an ounce of compliance now can lead to a pound of litigation prevention later.

The owner of an Oregon cannabis shop destroyed by the wildfires ravaging the West Coast is vowing to rebuild, despite being ineligible for the aid provided to most businesses. Thorin Thacker, the co-owner of Canyon […]

Baking The Perfect Cake (And What To Do When You Mess Up) :: THC /Marijuana cooking

Don’t let your cakes fall flat, dry out, toughen or crumble; with these tips, each slice will be total perfection. When something goes amiss in the kitchen, it’s important to understand what went wrong. When […]

Investment in innovation and outreach vital to promote plant health, FAO Director-General says Rome – As the world marks the International Day of Plant Health (IDPH) for the first time, the Food and Agriculture Organization […]

Legalizing Medical Marijuana to be on Mississippi November ballot