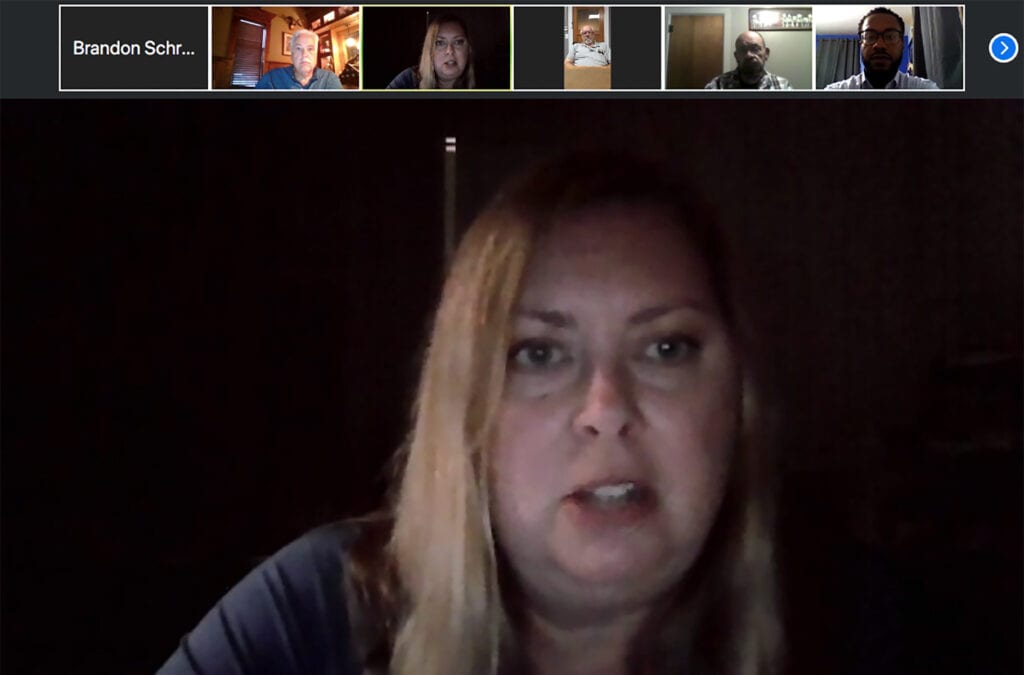 Lisa Ratliff of Botanical Biologics in Belding came before the Belding City Council on Tuesday with a request for the city to amend its marijuana ordinances to allow her to begin growing recreational marijuana in her facility at 1331 W. State St. — DN Photo | Brandon Schreur

BELDING — The owner of a medical marijuana grow facility in Belding is asking the City Council for a license to also grow recreational marijuana.

At the time, the City Council approved an ordinance for the conditional rezoning of the front half of the State Street building from business to industrial — a rezoning that would last for three years or until Ratliff’s permanent building is constructed, whichever comes first.

After making some adjustments toward the number of plants allowed inside the building last December, Ratliff came before the City Council on Tuesday to announce a new direction she’s hoping to take her business.

City Manager John Niemela explained Ratliff is requesting the city amend its ordinance to allow her a license to grow recreational marijuana.

“This adult-use cultivation license would allow Botanical Biologics to grow plants for adult-use in (their) current facility,” Niemela wrote in a letter to commissioners. “This product would then be sold to a licensed adult-use provision center. They are asking to cultivate for both adult-use, along with their medical grow product. The request is to amend Ordinance No. 550, Medical Marijuana, to add the additional license to allow them to grow up to 2,000 plants.”

Ratliff explained that the reason her business was now looking to start growing recreational marijuana is mostly due to changes across Michigan.

“What’s happening with the state is the number of patients renewing their medical marijuana cards is significantly dropping,” she stated. “This is not only because of COVID, but it’s due to the fact that the same product, in essence, is available at adult-use recreational retail stores. Therefore, (customers) don’t have to go to a physician, pay for the physician to re-do their paperwork (for medical marijuana) when they can just get the same product (by purchasing recreational marijuana).” 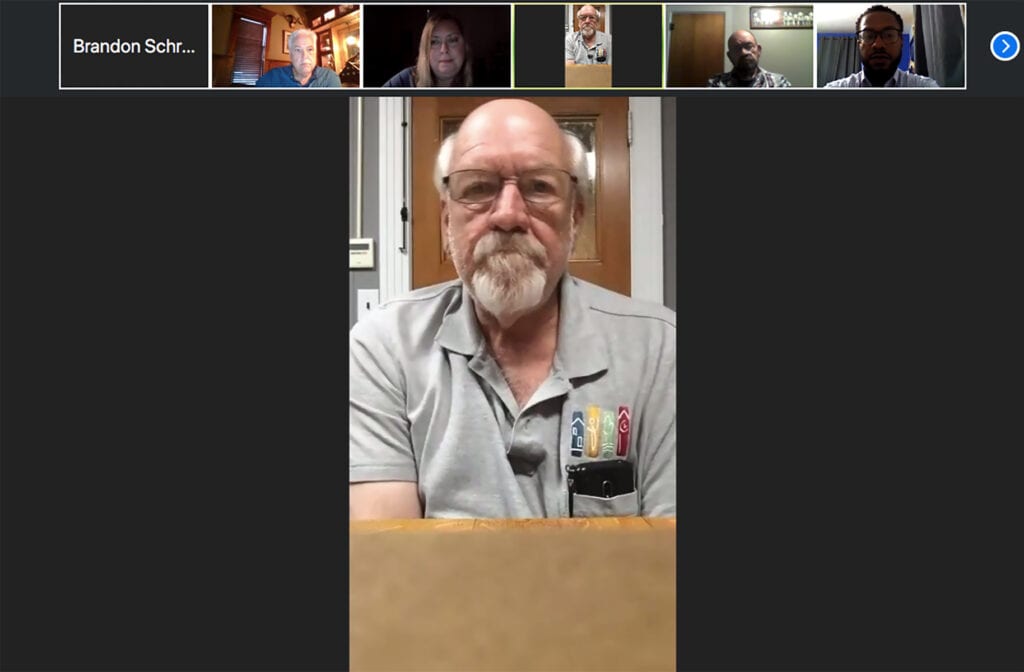 According to Ratliff, the only major difference in the way that recreational and medical marijuana is grown has to do with labeling.

“Within state regulations, you have a metric tag that has to go on each plant,” she explained. “The tag we use right now for medical is yellow. When you have adult-use, the tag is blue. Quite honestly, that’s about all there is to it. There’s no growing difference and the laboratory testing is primarily the same.

“(Allowing Botanical Biologics to grow recreational marijuana) would mean we could sell products to retail outlets that only have adult-use. Right now, Lowell and Cedar Springs only had adult-use retails. There’s no medical available. Grand Rapids, I believe, just recently decided they’re going to move to allowing retail stores to sell adult-use as well as medical. The industry is shifting once again — it’s an evolving industry, for sure — and we’re working on a lot of things to be able to stay relevant.”

Ratliff did note that Botanical Biologics finished harvesting its first batch of medical marijuana this week.

“We just received the results and passed very well,” she said, noting that the harvest is scheduled to be shipped out on Friday. “Our plan is to continue harvesting approximately every three to four weeks. We did lose power on Friday, but we were able to get a generator in place so we could continue operating.”

Councilmen Mike Scheid and Douglas Feehan, both of whom voted against a motion to approve the medical marijuana grow facility in 2019, said they were disappointed in Ratliff’s request.

“When we allowed this to happen out there, you assured us you weren’t going to do anything other than medical marijuana,” Scheid said. “Now, here you are, breaking your promise as you want to go the other way. That doesn’t say much for you or your company. You will not have my vote.”

“I apologize you feel that way, but I don’t feel like I’m breaking a promise,” Ratliff countered. “That was two years ago and, as I mentioned, this industry is constantly changing and evolving. For us to stay relevant, we have to change and evolve with the times.”

“I kind of agree with Mike, a little bit,” Feehan voiced. “When we first approved medical marijuana, I was under the assumption we weren’t going to approve adult-sale marijuana. I feel the same way. You’ll not have my vote.”

After Councilman Jorel Davis asked whether Botanical Biologics is only a grow facility, which Ratliff said was correct, Councilman Bruce Meyers proceeded with several questions of his own.

“I think we talked about the fact that medical marijuana isn’t what you’d get if you wanted to get high. Is that still the same, or has that changed due to the state regulations?” Meyers wondered.

“There are different strains and different medical strains, now,” Ratliff answered. “You can go on the state’s website and look at the different levels of THC and CBD that are into a product. If you walk into a retail store, you can look at what strains are recommended for different ailments.

“It’s a bit frustrating for myself, being a lead on medical marijuana, that things have gone to this. The state is continuously adapting and sending out these new regulations. We met with our attorney earlier and he says there are lobbying groups who don’t want differentiation between medical and adult-use, similar to the state of Illinois. Illinois just has one product license; it doesn’t determine if it’s used for adult-use or medical.”

Meyers continued to ask about how many marijuana plants are currently growing inside of Botanical Biologics.

“You could possibly have 3,000 plants under two different licensed, correct?” he asked.

“Yes, but, currently, we do not have room in our current building for that. That’s part of our expansion plan with the new building,” Ratliff answered, noting that construction on the new building likely wouldn’t start until next fall. “We may not have all 3,000 medical plants right now, but (growing recreational) would give us the opportunity to make sure we’re taking in revenue we need in order to pay and plan for the expansion behind the building.”

Miller asked a few questions regarding security and odor control at Botanical Biologics, neither of which Ratliff said has been an issue.

“There have been no security breaches. The second or third day, we activated the security system only because somebody didn’t pull the front door shut all the way. That’s the only time the police came out. We have resolved that and made some changes to the front door so that it can’t occur again,” she said. “…The only time I can smell any odor is when I go into the facility. I asked our neighbor to the west of us and he said that he hasn’t smelled any odor from our building.”

In order to approve Ratliff’s request, the City Council has to amend two ordinances — one regarding the city’s medical marijuana ordinance and the other involving rezoning the property.

Tuesday marked the first reading of both ordinances, meaning the second reading and any action taken by the council will occur at the next regular meeting.

Following the discussion, Scheid brought up the topic again at the end of the meeting.

“I’m really sorry to see that we made a business deal with somebody and they didn’t stick to it, only to then come up with excuses,” he said. “If there’s no difference in the product, they shouldn’t have to be here talking to us about it, should they? There’s something that we’re not being told. I’m sure it’ll come out, eventually.”

“We didn’t vote on it tonight, but I’ll say that knowledge is really important when we’re making these types of decisions,” Miller responded. “I encourage everyone that, if they haven’t read everything (Ratliff) or (Niemela) has passed on to us, you do that. If there’s any additional research as to what’s going on in the market place and everything else, it’s going to be important for us to understand that. While, at times, we want to lead with our emotions, it’s important we go after this factually.”

The Hemp Industry Responds to the DEA Rule With a Lawsuit

On August 21, the Drug Enforcement Agency (the “DEA”) released an Interim Final Rule (the “Rule”), which, in part, suggests that in-process hemp extract shall be treated as a schedule I controlled substance during any […]

With the worldwide death toll from the coronavirus rising exponentially, The Lancet drew attention to “accumulating evidence” that indicates “patients with severe COVID-19 might have a cytokine storm syndrome.” Characterized by intense immune overreaction in the […]

Watch more Marijuana Facts & Medical Marijuana videos: So I would say the most … source YouTube

Ireland could be ‘major player in cannabis production’ | Ireland

Federal Policy on Hemp CBD Is Taking Shape: What Needs to Be Addressed?

TrafficZion Review – can you really get 100% free traffic?