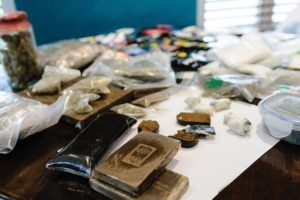 (This is an abridged version of the cover package that appears in the August issue of Marijuana Business Magazine.)

The Illegal cannabis market continues to be one of the biggest threats to legal marijuana industry, whether through diverting revenue from licensed businesses or stunting the growth of legal MJ companies across the United States.

Though industry advocates persist in their pitches that legalization – either through new states coming on board or a federal mandate – would put an end to the illicit market, their argument has not come to fruition.

Instead, illicit operators are still open for business in most markets where adult-use marijuana sales are legal.

In California, for example, about 80% of marijuana sales are illegal, according to New Frontier, an analytics firm in Washington DC.

According to industry insiders contacted by Marijuana Business Magazine, here are three key factors that should be considered in any discussion about the illicit market:

According to Kris Krane, president of Arizona-based multistate operator 4Front Ventures, the illicit market is “probably going to remain an issue until cannabis is legal nationwide and we can really enjoy the economies of scale of interstate, international commerce that’ll bring pricing down to a point where it’ll be virtually impossible for the illicit market to compete.”

Legal marijuana businesses don’t have to wait for federal legalization to compete with the illicit market, however.

Cannabis executives provided Marijuana Business Magazine with insights and advice on how the industry can combat the illicit market on its own:

The small garden of cannabis plants growing near Mexico City’s Senate building, reported this past March by High Times, has grown to a crop of more than 700 plants, some more than eight feet tall. […]

Do I Need to File Form D in Cannabis Fundraising? What if I Missed the Filing Deadline?

The Office of Cannabis Management (OCM) provided an update on when New York’s adult-use cannabis market (in full) should start accepting New York cannabis license applications: the middle of 2023. As reported by NY Cannabis […]

Top Marijuana Stocks To Watch Heading Into A New Month

Bad Actors in CBD: How to Distinguish Quality Products From the Rest

The best cannabis dispensaries in Massachusetts, according to readers

How To Pot and Re-Pot Marijuana/Cannabis Plants